The sports fans of Philadelphia are known for their unique brand of bottle-throwing, Santa Claus-attacking, expletive-laced rowdiness. But is this reputation deserved? Are they actually any different from other fiery fan bases in, say, Buffalo or Oakland? I asked my colleague Rob Arthur to look at citywide crime rates, and he couldn’t find any significant uptick on game days. Then again, multiple Eagles fans are alleged to have punched horses (!?!) during these playoffs alone:

The tug of war between Philadelphia’s view of itself as a combative underdog and the greater prestige to which it sometimes aspires will be on full display Sunday night, when the Eagles take on the New England Patriots in Super Bowl LII. Between the city’s sports heartbreaks and hooliganism, its perpetual inferiority complex and recent civic resurgence, this Super Bowl could be a turning point for Philly or another way for its fans to double down on their notoriety.

“You can’t deny that there is coarse [fan] behavior,” New York Times reporter Jeré Longman told me in a phone interview. Longman would know — he wrote a book about the neuroses of the city’s fans the last time the Eagles made the Super Bowl, back in 2005. But he also made a case that Philly deserves a better image. “It’s the founding city of the United States; it has these great institutions,” Longman said. “And now it has a vibrant art and music scene, great food, lots of young professionals living downtown.” In Longman’s view, Philadelphia too often sells itself short of what it could be (and already is) when its fans live down to their boorish reputation.

“The city’s slogan actually used to be, ‘Philadelphia: Not as bad as Philadelphians say it is,’” he said. “Maybe this Super Bowl will be a chance for people in Philadelphia to realize what a great city they have.”As someone who lived in Philly for about five years, I agree about the city’s greatness — which makes the juxtaposition between its friendly day-to-day interactions and sometimes psychotic sports fandom even more jarring. 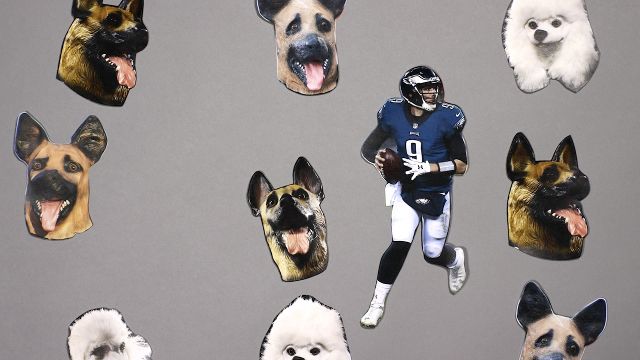 The roots of the Fairmount Park-sized chip on Philly fans’ collective shoulders go back decades — the infamous Santa snowball incident happened in 1968, less than three years into the Super Bowl’s existence. But they have seemed to grow deeper as the years went on without a championship in the sport Philadelphia embraces the most. The Eagles, which have been around since 1933, are one of 13 NFL franchises that have never won a Super Bowl, and nobody has won more total ballgames among the Super Bowl oh-fers.The Eagles did win three NFL championships before the Super Bowl existed, most recently in 1960. But any fan who was following the team back then is now at least into their mid-60s, if not much older. It is, to say the least, a distant memory from another era.

Making matters worse, the Eagles’ rivals in the NFC East — the hated Dallas Cowboys, New York Giants and Washington Redskins — have won a combined 12 championships in the Super Bowl era. Six times a year, Eagles fans are forced to contrast themselves against fan bases whose historical résumés have been weaponized for the taunting.

There’s a cultural component to the frustration as well. “Football represents Philadelphia’s ideal view of itself: a tough, blue-collar sport,” Longman said. Both he and Glen Macnow, a longtime host at the local sports-talk radio station WIP, agreed that the Eagles are the one team in the city whose rabid support stretches across demographic and societal lines. Indeed, over the past five years, the Eagles have dominated the search-traffic battle against the city’s other pro teams to a greater degree than the national average.Granted, the Sixers went on their infamous tanking expedition during this span.

“It’s a football town,” Macnow said. “The Eagles bring together everybody in the city.” If so, that also puts the team squarely at the emotional epicenter of Philadelphia angst.

The city’s general lack of sports success over the years hasn’t helped matters. Philly teams went more than 25 years without a title, between the 1982-83 76ers’ NBA crown and the Phillies’ World Series victory in 2008. And it hasn’t been for lack of trying. In the 34 years starting in 1984 — the year after the Sixers won their title — through 2017, no other city in pro sports has underachieved more on the championship front, based on the number of actual titles won and the number we’d expect from how many teams they had in each sport.Including only the “Big Four” North American pro sports of football, basketball, baseball and hockey. (Sorry as always to all you ardent MLS fans out there.)

(And that’s after assigning Philly and Boston a “half-championship” each for the upcoming Super Bowl, assuming that each team has roughly 50-50 odds. If we didn’t do that, Philadelphia teams would be running a collective 3.7 championships below expectation since 1983.)

Here’s another way this data helps illustrate why Philadelphia fans are so emotionally overwrought when it comes to sports: In terms of expected titles — which measures the sheer number of cracks a city has had at championship glory — Philly trails only New York, Los Angeles and Chicago (and it’s tied with Boston and Detroit). Justifiably, it thinks of itself as belonging among that group of towns. But collectively, those five cities have won 57.5 championships — 25.1 more than expected — since 1983, with each exceeding their expectation by at least 3.2 titles. Philly, meanwhile, is running 3.3 titles below expectations. Add in the fact that Philadelphia ranks only 25th in championships won since 1983 despite being a top-eight U.S. metro area by both population and economic might, and it makes sense why Philly fandom is often a powder keg waiting to explode.

“It’s like a permanent wedgie,” Macnow said of Philadelphia’s sports inferiority complex. “You look up the East Coast at New York and see their championships and at Boston’s smug fans — we call them ‘Massholes.’ There’s an element of envy there as well.”

That’s one reason the Patriots might be the ultimate opponent for the Eagles as they try to end their Super Bowl drought. Since 1983, Boston teams have won 7.7 more titles than expected — in exactly the same number of chances as Philly had. The cities are similar in many ways, from population to their shared importance in the early history of the country, a common insular attitude and their parallel rivalries with the behemoth situated between them — New York City. It isn’t difficult to envision an alternate universe in which the fates of Boston and Philadelphia sports had switched places several decades ago.

Everyone agrees that an Eagles win on Sunday would set off something approaching total pandemonium in the Philadelphia. “It would be by far the largest sports celebration ever,” Longman told me. “There aren’t enough cans of Crisco in the world to keep people from climbing every [street] pole in Philadelphia.” Longman thought the potential crowds would dwarf the Phillies’ championship parade in 2008 and be more akin to when the pope visited the city in 2015.

Whether the long-awaited Super Bowl victory would mark the beginning of a change in fans’ behavior, however, is another question, given that so much of Philly fandom — for good and bad — is wrapped up in the feelings of being overlooked and misunderstood.

“It would require a change in a mindset that has prevailed for many generations,” Longman said. “It’d be fascinating to see if Philly is comfortable with being the overdog instead of the underdog.”

Although it would only begin to make a slight dent in the city’s championship shortfall of the past three and a half decades, winning Sunday would be a good start.